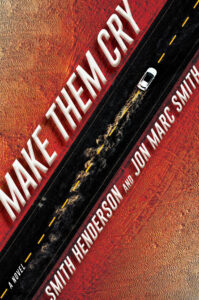 “In their debut thriller Make Them Cry, Smith and Henderson burst onto the scene with muscular style, a blockbuster plot, and flair to spare. Intelligent, informed, important, humane, and remarkably witty, Make Them Cry arrives like a bullet train to your cerebral cortex…No doubt, Agent Diane Harbaugh, a bad-ass woman for our times, is here to stay and will take her rightful place alongside Bourne and Reacher before long.”
–Ivy Pochoda, author of Wonder Valley and These Women

“Make Them Cry is one of those rare novels that is both artistically principled and marvelously fun to read, a combination of elegant, painstaking craftsmanship and suspenseful entertainment. If that were not enough, it is also a book that reaches into the reader’s heart. It is not often that I can say, as I do now: I loved this novel.”
—Tim O’Brien

“[A] novel reminiscent of Robert Stone’s “Dog Soldiers”: its skin is pure entertainment, but its bones are political.”
—Tod Goldberg

“Plenty of flaws in the main character but few in this satisfying thriller.”
–Kirkus Reviews (starred review)

“Flawed, flesh-and-blood characters provide nuance and depth, and the authors’ grasp of global politics is on full display. Fans of Don Winslow and T. Jefferson Parker will be enthralled.”
—Publishers Weekly

“Make Them Cry is reminiscent of the best 1970s thrillers, but its secrets are of the moment, as a former prosecutor turned DEA agent gets wind of a cartel secret and heads to Mexico City to investigate. This is chiseled, adrenaline-fueled thriller writing at the highest level.”—Dwyer Murphy, CrimeReads Managing Editor

“The Magic of Plot and Catharsis: A Conversation with Smith Henderson and Jon Marc Smith” -Los Angeles Review of Books

“Twelve Books You Should Read in September” -Crime Reads

“What Does It Take For Two People To Actually Write a Novel Together?” -CrimeReads

“Co-Writing a Novel 101” -The Writer Experience 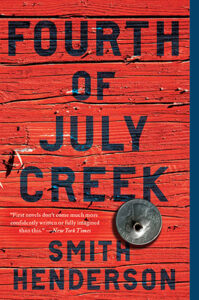 “This book left me awestruck; a stunning debut which reads like the work of a writer at the height of his power…Fourth of July Creek is a masterful achievement and Smith Henderson is certain to end up a household name.”
—Philipp Meyer, New York Times bestselling author of The Son

“Fourth of July Creek knocked me flat. This gorgeous, full-bodied novel seems to contain all of America at what was, in retrospect, a pivotal moment in its history…Smith Henderson has delivered nothing less than a masterpiece of a novel.”
—Ben Fountain, author of Billy Lynn’s Long Halftime Walk

“Fourth of July Creek cannot possibly be Smith Henderson’s first book. Its scope is audacious, its range virtuosic, its gaze steady and true. A riveting story written in a seductive and relentlessly authentic rural American vernacular, this is the kind of novel I wish I’d written.”
—Claire Vaye Watkins, author of Battleborn

“Fourth of July Creek is an astonishing read. The writing is energetic and precise. Henderson has a mastery of scale that allows this particular place and these particular people to illuminate who we are as Americans…I could not recommend this book more highly.”
—Kevin Powers, bestselling author of The Yellow Birds

“Tremendously satisfying—think Daniel Woodrell’s Winter’s Bone…or Jimmy McNulty…set…in…another kind of violent American wilderness…[a] mesmerizing accomplishment. I cannot think of a finer first novel; it’s hard, in fact, to think of a finer second, third, or fourth one, either.”
—Antonya Nelson, author of Bound, Nothing Right, and Some Fun

““Fourth of July Creek” is…an impressive book — deeply so…the story this prose conveys, and the manner in which Henderson unfurls it, bears its own unalloyed power.”
Jonathan Miles for the New York Times Sunday Book Review

“Like…Peter Carey and Salman Rushdie, Henderson knows how to create the sensation that we’re being propelled through a story that’s just as poignant as it is frightening.”
Ron Charles, Washington Post

“…astonishing…Fourth of July Creek is Henderson’s first novel, a somewhat startling fact because the book reads like the work of someone who has been around and seen too many things he wished he hadn’t. You’re going to hear more about it come awards time.”
Miami Herald

“This book is stunning. The language, the setting, the characters, their spirit, their damage. All of it.”
Shelf Life, Entertainment Weekly

“…Smith Henderson’s wise, gripping monster of a debut novel…is a hell of a great book.”
Esquire

“A gritty debut novel… An intense, mesmerizing book that uses this surprisingly intimate relationship to explore grand themes about American culture… Both devastating and inspiring.”
The Economist

“The tension between the individual and community ripples through a philosophical, thought-provoking novel, where Henderson contrasts civilisation and the wilderness and raises profound questions”
Daily Express

“Henderson has established himself as a tremendous writer and delivers a troubling but heartfelt novel that depicts our country’s deepest flaws, worst contradictions and greatest challenges.”
Cincinnati City Beat

“The book hurtles forward with the velocity of a thriller…a big novel, in ambition as well as in size, and it’s eloquent in the way it welds its personal stories to its larger, ongoing argument about which vision of America should prevail.”
Cap Times

“Henderson bears comparison to Jonathan Franzen as a dramatic chronicler of contemporary American life…he has the same intense readability and feel for modern states of mind.”
Toronto Star

“If you haven’t read this book by the end of the year, you need to have a stern word with yourself. Henderson is going to be huge.”
Bookmunch

“…the book careens through 467 pages that are beautiful and tragic, poignant and unresolved.”
Missoula Independent

“…(an) action-packed novel, at its core a story of families finding their small corners of the frayed and threadbare American fabric, and the ends they’ll go to protect them.”
Minneapolis Star Tribune

“Fourth of July Creek covers tremendous ground both narratively and literally…Add this one to your reading list.”
Portland Mercury

“Henderson’s writing is smart…often catching the mind’s eye in a way that renders his rural drunks and wary streetkids as much more than generic types.”
Winnipeg Free Press

“Fourth of July Creek is an ambitious, atmospheric novel…written with all the force, velocity, and poetry of Jim Harrison, Barry Hannah, Thomas McGuane.”
Everyday eBook

“On a political level, Henderson skillfully presages the contemporary political environment in his portrayal of the America of three decades ago. On a deeper level, this dark, compassionate novel finds in Jeremiah’s—and Pete’s—pain a mirror of everyone’s. This is a significant debut.”
Library Journal

“There is an urgency about Fourth of July Creek that makes it very difficult to set aside. That is a very impressive accomplishment for a first novel.”
Stratton Magazine

“…Henderson homes in on the U.S.’s dark side…(i)n this remarkable first novel, modern America is a hard place that only kindness and empathy can make easier.”
Watermark Books

“At the risk of sounding like everyone else who has had the privilege of reading Fourth of July Creek, it’s hard to believe that this is Smith Henderson’s first full-length novel.”
San Francisco Book Review

“Henderson holds you gently but won’t let you blink or look away.”
Bookreporter

“There should be fireworks shooting off for Smith Henderson’s first novel, as it is a just cause for celebration…the book is a triumph.”
Coot’s Reviews

One Response to Press